A Message of Appreciation and Hope to Our Nation’s Capitol 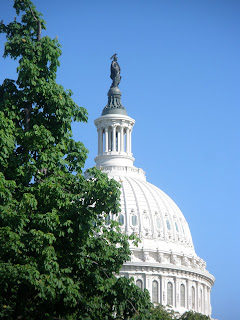 US Capitol on a bright blue spring day in Washington, D.C.
This was no ordinary trip to Washington, D.C. On many of my previous trips to the nation’s capital, my message was one of deep concern. I pleaded for a change in the way middle-sized rural hospitals like Grinnell Regional Medical Center receive reimbursement under the Medicare system.

This month’s trip to the Beltway found me with a skip in my step and a message of THANKS. We finally prevailed in getting the “tweener” issue addressed as part of this year’s historic and massive healthcare reform bill. For a description of the “tweener” issue, please see these past blogs.

Deep in the belly of the legislation lays a tweak of the Medicare reimbursement formula. The change will result in much needed relief from the unfair payment scheme we have experienced for many years. Beginning in 2011, GRMC should see about $750,000 in improved payment from the federal government for caring for our Medicare patients. That is truly welcomed news because we were paid $2.5 million below our costs for this care in 2009! This benefit will not only help GRMC. It will also help hundreds of other 25- to 50-bed hospitals across rural America.

Todd Reding, chair of GRMC’s Foundation Board Chair and a member of our Board of Directors, and Kyle Wilcox, a University of Iowa graduate student in health management and policy, joined me on the trip to the Hill. Our primary focus was to say thank you to both of Iowa’s Senators and to two of GRMC’s Congressmen.

Even though Sen. Charles Grassley (R-IA) did not vote in favor of the bill, we took the time to thank him. The reality is, the “tweener” payment improvement plan started in the Senate Finance Committee where he is ranking member. Michael Park, Grassley’s staffer for the committee focused on Medicare, was extremely helpful on this issue early in the process.

Sen. Tom Harkin (D-IA) championed this cause, too. In his important role as chair of the Health, Education, Labor and Pension Committee, he had a lot to say about healthcare reform. His staffer, Jenelle Krisnamoorthy, fought the good fight during difficult negotiations with delegations from larger states not interested in sharing scarce resources.

Rep. Leonard Boswell (D-IA) and his healthcare assistant, Katy Siddall, worked hard on the House side to make sure the Senate bill’s tweener language was not changed during reconciliation. Rep. Boswell also helped orchestrate a meeting with both our senators in 2008 to brainstorm ways to get “tweener” legislation moved ahead given their leadership roles in the U.S. Senate. 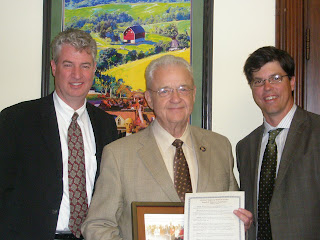 Todd Linden and Todd Reding presenting board
resolution of thanks and photo to Congressman Boswell
We also thanked our “adopted” representative, Bruce Braley (D-IA). The Congressman was born at GRMC, and his mother lives in nearby Brooklyn. Rep. Braley and his staffer, Mike Goodman, described to us their 2:30 a.m. victory in the Speaker’s office the day of the historic vote on healthcare reform. The victory? The start toward “value based purchasing” and the government recognizing the geographic variation in payment needs to be addressed in the Medicare system! Rep. Braley helped get $800 million dollars added to the reform package during reconciliation to prop up payment around the nation to the lowest reimbursed physicians and hospitals providing high quality care!

Todd Reding presented each of these leaders with a special resolution from the GRMC board expressing our appreciation for their efforts to bring a little equity into the Medicare payment system. Their efforts make it possible for us to continue to provide the care people deserve in Grinnell and other middle sized rural hospitals in Iowa and around the country. Todd also gave each of them a photograph taken after one of our Senior Education Center meetings. The picture includes many folks who helped communicate the need for change with our delegation over the years. This group of seniors is emblematic of the very people this legislation will help. (See photo and board resolution)

Of course, the fight is not over yet. A great deal of uncertainty exists in the overall healthcare reform bill. Potential potholes could detract from our future abilities to deliver the care people need. Yet, it was great to take time to pause, reflect, and give thanks for an epic battle to create some equity in the payment flaw that has plagued us over the past half dozen years. 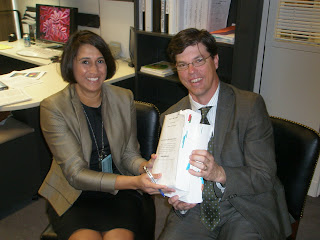 Todd Reding with Jenelle Kristnamoorthy with Healthcare
Reform Bill which contains fixes for the “tweener” payment issue
Incidentally, it was Kyle’s first trip to Washington, D.C. What a great education for a young man just starting his career in healthcare leadership. In addition to meeting all of our Congressional delegation and their health staff members, he also heard some great presentations from the American Hospital Association, visited a few monuments and museums, peeked at the U.S. Constitution and Bill of Rights, and ate some great food. (For those concerned about costs, I should note that I paid for Kyle’s trip and split costs for my trip with the hospital, the American Hospital Association, and myself.) I also have to admit I felt just a bit safer wandering around Washington with Kyle by my side—this high school and college football standout still has some size on him! 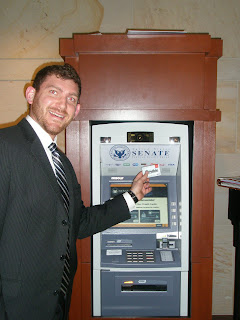 Intern Kyle Wilcox extracting funds from the “US Senate Money Machine”
The postings on this site are my own and don’t necessarily represent GRMC’s positions, strategies, or opinions.
Posted by Todd C. Linden at 9:00 AM 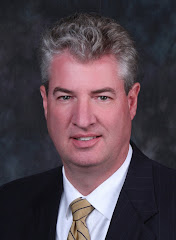